From the Masterminds of the Final Fantasy series Square enix comes yet another instalment. Final Fantasy XV: Day One Edition. A kingdom fallen, a prince and his friends and guards journey to reclaim their homeland and the kings throne.

Final Fantasy XV puts you in the shoes of Prince Noctis Lucis Caelum heir to the Lucian throne. who sets out on a journey to wed Lunafreya Nox Fleuret but during this journey discovers that his kingdom is under attack, he travels with his royal guard and friends, Gladiolus Amicitia, Ignis Scientia and Prompto Argentum 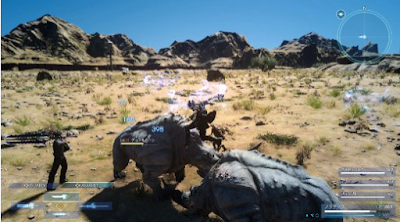 Playing previous Final Fantasy games the gameplay was quite a strange shake up for the series, implementing real time combat rather than the turn based inserting commands style. It’s delivered with such grace however and such difference that I can say it was a good move in where the series should go. Blocking attacks and countering straight after feels so fluid and smooth as well as using the warp ability Noctis has to quickly dash to an enemy and deliver a quick combo, Noctis can equip up to 4 different weapons at a time and switch out between these weapons freely to make the combos damage more. Issuing commands to the three party members is also available to either allow a quick shot from promptos pistol or a circular charge by Gladiolus which can get immediately followed up by a Noctis warp. Experience is done differently to other games as in all your experience amasses together for each character and is only applied to the character upon resting at a camp or hotel.

This game is heavily set on giving you the freedom to explore as well as providing a vast open landscape to travel around that it really does feel like a quest. You are given a car at the start of the game named the Regalia that can be driven to any destination you wish by Noctis or you can sit back whilst Ignis drives the car to a specific location. camping at certain locations is an option in which experience is gained and gives Ignis a chance to cook food using food you’ve purchased or using ingredients you’ve collected whilst travelling. Hunting monsters for quests is also present in the game too. Just head to a hunting board or a tipster as they call them in the game which are just characters that run shops to receive a list of hunts that can be done.

Each character has their own unique exploration skill which can be levelled up by doing specific actions
Noctis Fishing:
At specific points near large bodies of water, Noctis can opt to doing some fishing which consists of a small minigame in order to catch fish. These fish can be used in recipes that Ignis cooks
Gladiolus Survival:
Based on the amount of walking the group does. Gladiolus has a chance to pick up items and increase his skill to pick up better items as travelling occurs
Ignis Cooking:
At camps Ignis can cook different dishes to increase allies stats for a period of time as well as increase the skill level to make better dishes.
Prompto Photography:
Prompto carries a camera along with him and will take shots of practically anything you may come across whether it be a shot of the car or a location you visit. these photos can be viewed and saved.

Although this game originally didn’t appeal much to me, due to the battle system I purchased it and it really did impress me but what this game actually is, I find myself travelling around doing plenty of side quests and that’s probably why I have only reached chapter 5 at this time. With upcoming DLC featuring each of the characters separate stories and a multiplayer expansion there really will be so much more content to go over with this title.

You can purchase Final Fantasy XV from Amazon